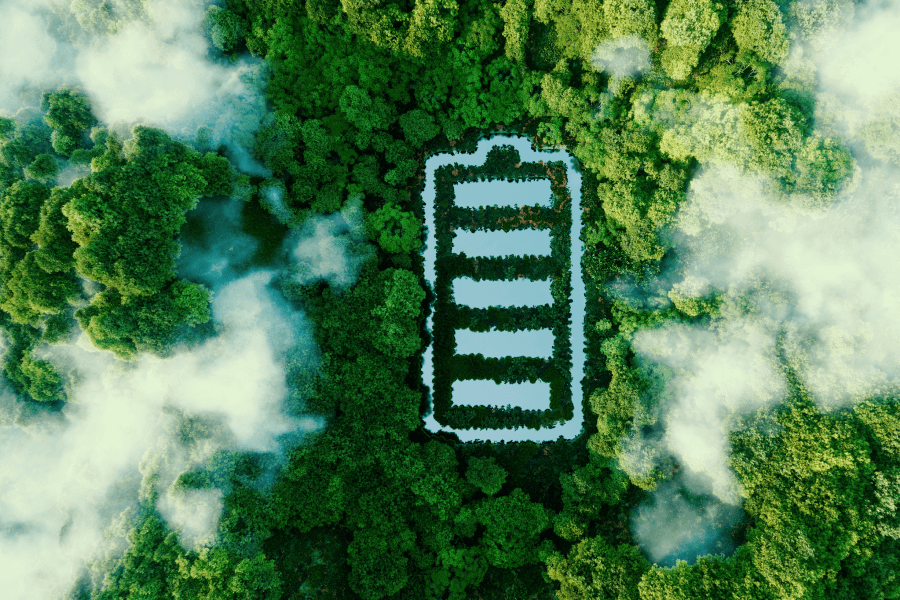 There has been some recent chatter in the media debating whether or not adding a solar battery to your home is an environmentally friendly thing to do. They argue that it takes more carbon to mine and manufacture home batteries than the carbon saved by reducing the home’s grid energy use.

It’s an important question.  If batteries are making the environment worse, perhaps we should not install them.

So we set out to find the answer for ourselves.  Are solar batteries good for the environment, or not?

The first piece of the puzzle is figuring out how much carbon it takes to make the batteries in the first place. We will call this the “carbon cost” of making a battery.

Then we can look at the amount of carbon that the battery saves by using solar to power your home rather than grid electricity. We will call this the “carbon benefit” of using less fossil fuel energy from the grid.

The “carbon cost” of making a lithium battery

Making a lithium battery involves mining the materials for the battery, the assembly of the battery, and the energy required to power the mining and assembly.

The Sweedish Environmental Research Institute (IVL) did a few studies on the topic, with the first coming in 2017.  At the time, they concluded that the amount of carbon dioxide required to make each 1 kWh of battery storage was in the range of 150kg-200kg CO2-eq/kWh.

In 2019, they revised the number down to between 61kg-106kg CO2-eq/kWh.  However, the reason for this was that they assumed that the power used to mine and assemble the battery was coming from 100% renewable sources. While this is a nice idea, we don’t think it’s reasonable to assume that all batteries are manufactured with renewable energy because most of the world is powered by fossil fuels like coal and gas.

Another 2019 report by Circular Energy Storage Research and Consulting put the carbon cost of making batteries at between 39kg-196kg CO2e/kWh.  While it’s a wide range, it’s very similar to the IVL estimates 61kg CO2e/kWh on the low end, and 200 CO2e/kWh on the high end.

To get the worst case scenario, we are going to use the high end number of 200 CO2e/kWh for the “carbon cost” of making a battery.  This assumes all the energy to mine or assemble the battery comes from coal power, the dirtiest form of electricity available.

Is that a lot, or a little?  Like anything else, the answer is – compared to what?

The “carbon benefit” of installing a solar battery

The carbon impacts of using energy from the grid are huge in Australia because 76% of our power currently comes from fossil fuel sources like coal and gas. That means every time you flick on a light switch, it’s like you are burning coal or gas to make that power.

But adding a battery to your solar panels changes that.  The battery stores your extra daytime solar power for use at night.  That means you are using carbon free renewable energy to power your home, rather than the dirty grid energy you would have to use if you didn’t have a battery.

Different states in Australia have different sources of energy.  For example, Tasmania has a lot of hydroelectric power stations that generate electricity nearly carbon free.  For that reason, offsetting power in Tasmania has the least environmental impact of any state in Australia.  By contrast, Victoria has the highest amount of dirty energy in its grid with a lot of coal and gas.

A table of the “carbon benefit” of removing 1 kWh of electricity from the grid is below.  It’s sourced from the official Australian Government site here, and is sorted by state so you can see how the impact changes depending on where you are in Australia.

Let’s look at the top and bottom states to see how much carbon is removed when you use battery power rather than grid power.

The first step is calculating how much electricity the battery takes off the grid.  We will use the 10kWh battery from before, however we will only use 9 kWh per day as that is the usable energy from the battery.

A solar battery is charged up during the day when the solar panels are making power, and then that power is used at night.  That is to say, the 9 kWh of battery electricity is used once per day.

The Alpha ESS battery has a 10 year performance warranty, so we will use 10 years as the lifespan of the battery.

What does that translate to in terms of “carbon benefit” in each state?

What this shows us is that the “carbon benefit” of installing a 10kWh battery is between 5,584 kg and 32,193 kg of carbon depending on the state you’re in.

The worst case “carbon cost” of making a 10kWh solar battery is 2,000 kg of carbon dioxide.

Therefore, installing a solar battery is good for the environment.

Has an online blog or salesperson advised you that solar batteries ‘can’t make economic sense’? These people often have their own interests at heart,

Design Your Own Solar Solution Online

Custom design a solar solution for your home in a matter of seconds. And get an accurate estimated quote… all from your phone or